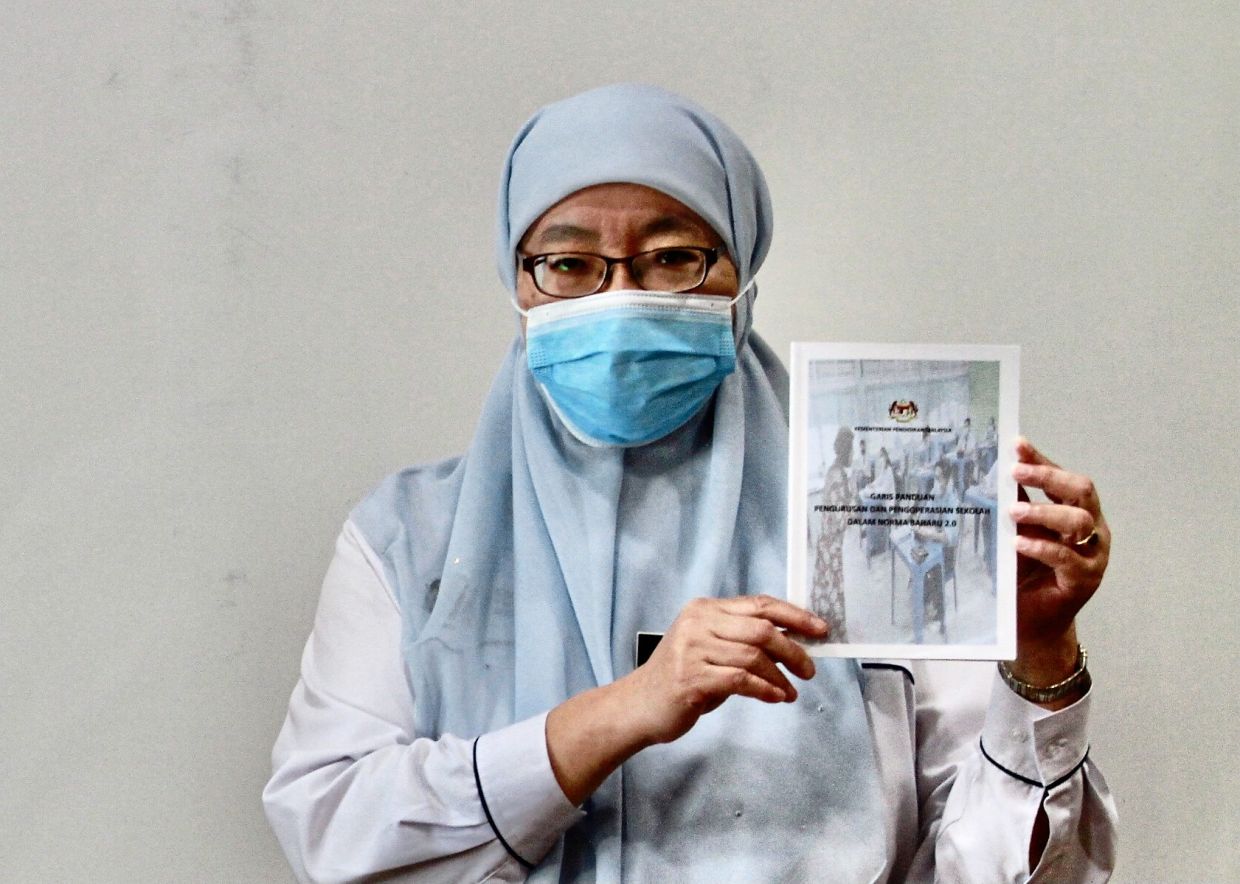 Latest version: Habibah with a printed copy of the updated guidelines released by the ministry. — LOW LAY PHON/The Star

PETALING JAYA: An updated and improved compilation of guidelines on how to manage students’ movements in schools, dealing with Covid-19 cases, its close contacts and detecting the symptoms has been released ahead of the Sijil Pelajaran Malaysia (SPM) examination next week.

Education director-general Datuk Dr Habibah Abdul Rahim said the safety of students, teachers and staff was its priority when releasing the School Management and Operations Under the New Norm 2.0 guideline on Feb 9.

It contained improvements from the previous versions, she said yesterday.

“The first guideline was issued on June 4 last year, just before we reopened schools but once schools started, there were new issues to consider and we updated them accordingly.

“The latest version is based on the current Covid-19 situation in the country, ” she added.

The new additions were students’ movements when they were in school until dismissal, and how to manage those with Covid-19, close contacts and the symptoms shown, she said.

The guideline also stressed on the need to maintain the confidentiality of students, teachers and staff infected with the virus, Habibah said.

“The guideline has gone through various levels of discussions and thoroughly looked into. The challenge with the ministry now is students’ compliance with the guidelines, especially among the younger ones (in primary schools), ” she said.

Emphasising students and teachers’ safety, teachers aged 50 and above who were not comfortable serving as examination invigilators would not be forced to take up the role, she said.

On Monday, Examinations Syndicate director Datuk Pkharuddin Ghazali said to ensure the exams run smoothly and students would be in a safe environment, exam halls would be sanitised every evening.

“We are doing our best to ensure the examination is conducted smoothly in a safe environment. And we are also allowing students to eat in the exam halls with food delivered to them, ” he said.

The latest guidelines can be viewed at moe.gov.my/muat-turun/pekeliling-dan-garis-panduan/4109-garis-panduan-pengurusan-dan-pengoperasian-sekolah-dalam-norma-baharu-2-0/file.

The manual was to ensure that online and offline teaching approach reached the students, she said.

“We don’t want students to be left behind. From the survey we conducted, we noticed that there are different timetables and hours used to teach students.

“The differences have caused various problems, such as concerns over whether the basic content of the curriculum would be delivered within the academic year, ” she said.

The release of this manual as a guide for teachers on how to organise their timetable and conduct PdPR is also useful to students as well.