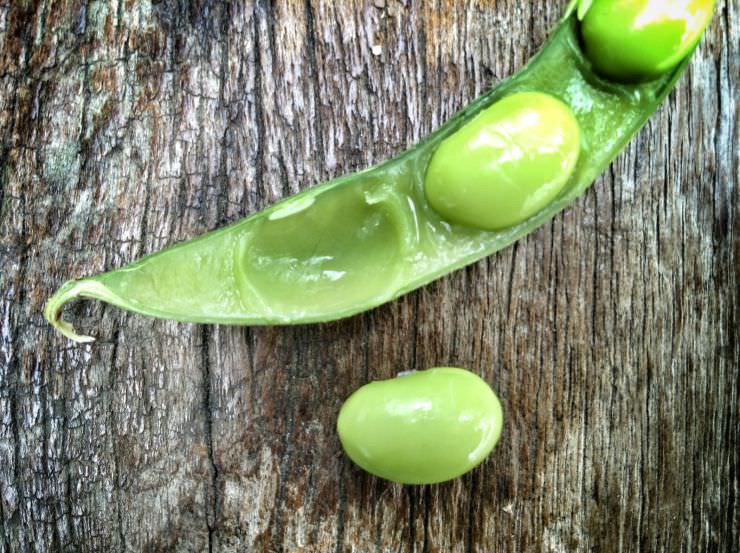 Edamame is a green and natural whole food. Savvy shoppers know that it is not healthy to eat, however, and avoid it no matter if fresh, frozen, or dry roasted.

Edamame can be found in some form or fashion on nearly every aisle of health food stores these days. A variety of packages featuring dry roasted, raw, steamed/chilled, or fresh edamame pods entice shoppers into thinking this pleasant looking, sweet-tasting bean can help them reach their health goals.

Even supermarkets and warehouse stores are cashing in on the edamame craze. Shoppers find conventional varieties displayed with the freezer foods next to less enticing bags of broccoli, carrots, and peas.

Sourced from immature green soybeans, edamame pods are typically cut on the ends and then steamed, boiled, or microwaved. If boiled, salt is usually added to the water. If steamed or microwaved, the salt is added after cooking with the soft green beans removed from the pods.

Edamame is usually served salted and cold as an appetizer in Japanese restaurants. Edamame is also found in modern cuisine from China, Korea, and Hawaii, although the latter is largely due to Japanese influence rather than ancestral Polynesian traditions.

Historical Use in Asia

It seems to make sense that edamame would be a traditional food since it is unprocessed and simple to prepare. Historical references appear to bear this out as the earliest documented reference for the word edamame occurred in 1275 AD when the Japanese monk Nichiren wrote a note thanking a parishioner for the gift of “edamame” he had left at the temple.  However, it was not known if this edamame was for consumption or for simple crop rotation purposes.

Kaayla Daniel PhD, The Naughty Nutritionist writes in her article What’s Edamame? And Other Questions about Green Vegetable Soybeans that historian William Shurtleff of the Soyfoods Center in Lafayette, CA, knows of no early references to green vegetable soybeans in China. Further, she writes:

An herbal guide from 1406 (Ming Dynasty) indicates the whole pods of young soybeans could be eaten or ground for use with flour, but it recommended such uses only during times of famine. A Materia Medica from 1620  recommends edamame, but only for the medicinal purpose of killing “bad or evil chi.”  By 1929, however, edamame was definitely on some menus. William Morse of the USDA reported on a field trip to China that “as early as May, small bundles of plants with full grown pods were seen on the market. At the present time the market is virtually flooded with bundles of plants with full grown pods, the seeds of which are also full grown.  The pods are boiled in salt water and the beans eaten from the pods.”

Dr. Daniel also disputes the claims by the soy industry that Asians have consumed this legume for 5,000 or even 10,000 years. She says that digging into anthropology and history texts absolutely does not support this common claim.

The oldest soyfoods, miso and tofu [bean curd] date back only about 2,500 years. Contrary to popular belief, soy was not eaten as a food 5,000 years ago, but it was highly regarded for its role in crop rotation.

Green and Natural But Not Healthy

Looking a bit like a cross between cannellini beans and green peas, edamame seems like a dream come true for a parent seeking healthy snack alternatives. Children gobble them up by the handful due to their addictive sweetness, and adults who prefer salty snacks can chow down on the dry roasted versions available in large, economy-sized bags.

While simple and quick to prepare and even easier to eat, edamame simply does not make the grade as a food that is healthy to eat on a regular basis.

One big reason why is because manufacturers source most edamame in the United States from genetically modified soybeans. GMOs are not labeled in North America as of this writing. Hence, even alert shoppers are frequently unaware of their presence in the foods they buy.

Most countries in the rest of the world require labeling of GMOs. So, edamame is not usually GMO in those locations because consumers generally regard the identification of GMO ingredients on the label akin to a skull and crossbones.

Beware that most edamame served in Japanese restaurants and featured on salad bars in North America is also GMO! So enjoying that edamame appetizer that is served before your meal at the local sushi joint isn’t the healthy first course that most presume it to be.

GMO soy is not good for your health even when it is green and unprocessed.

Some of the most worrisome animal studies to date that should give any edamame lover pause include:

Profuse hair growth in the mouth … from eating GMO soy for only 3 generations? Yes, this is what the Russian researchers were horrified to discover. No wonder Russia has imposed a ban on all GMOs essentially kicking Monsanto to the curb.

Ok, so you know all about the dangers of GMO soy and edamame. You’ve changed your buying habits and source only organic. Isn’t this a better choice?

Yes, it is definitely better and avoids the potential for chronic health problems observed in animal studies involving GMO soy.

However, even organic edamame presents a health threat when it is consumed on a regular basis. This is due to the high amount of hormone-disrupting phytoestrogens and anti-nutrients called protease inhibitors (primarily trypsin). These anti-nutrients are present even when picked young and green as edamame.

While eating edamame raw is the biggest no-no, cooking the pods don’t do enough to resolve these issues either. Cooking does little to reduce the phytoestrogens in edamame. Protease inhibitors remain virtually the same as well.

For decades, the USDA and other researchers put their efforts into finding safe and inexpensive ways to deactivate these protease inhibitors which wreak havoc with both digestion and the pancreas. Boiling, roasting, and steaming can help, but don’t do enough. The only way that comes close to neutralizing them is via traditional fermentation. This successful method is used to make miso, tempeh, and natto.

Since preparation of edamame involves only light cooking in most cases, you can count on most of the anti-nutrients remaining. All of the hormone-disrupting plant estrogens are present as well.

With regard to the green bean’s effect on digestion, the protease inhibitors present in high amounts in edamame suppress some of the key enzymes that help digest protein.

Because these inhibitors block the protease enzyme needed to digest protein, the pancreas has to work overtime to produce more. If this happens only occasionally, the pancreas quickly recovers, no big deal. But if a person consumes edamame frequently and in large amounts, there is no recovery period. This leads to an increase in both the number of pancreatic cells (hyperplasia) and the size of those cells (hypertrophy). Combine that with frequent drinking of soya milk or foods containing soy protein isolate, and you’ve really got problems!

Pancreatic hypertrophy and hyperplasia in humans result in the loss of the ability to secrete sufficient enzymes. Insufficient enzyme production by the pancreas means digestive distress for adults and growth problems for children.

Irvin Liener, PhD, professor emeritus at the University of Minnesota and the world’s leading expert on anti-nutrients and toxins in plant foods, has a warning for those who might be addicted to edamame:

Soybean trypsin inhibitors do in fact pose a potential risk to humans when soy protein is incorporated into the diet.

Below are just a few of the many studies on how plant estrogens (also called isoflavones or phytoestrogens) in soy (edamame too) is can disrupt hormonal balance:

Possibly the most worrisome research regarding soy consumption is the precancerous changes to breast tissue that can occur over time. If you want to know the truth about how an edamame habit can harm your breast health, Breast Cancer Boot Camp, coauthored with William B. Hobbins MD, Sellens provides striking, irrefutable visual evidence of adverse, precancerous effects on the breasts from estrogenic foods like edamame.

Your breasts don’t lie! These pictures of precancerous breasts from eating estrogenic foods will have you rethinking your edamame consumption in a hurry if the green bean is your go-to snack.

According to Kaayla Daniel PhD, world-renowned soy expert who has appeared on the Dr. Oz Show among others and authored the must-read The Whole Soy Story: The Dark Side of America’s Favorite Healthfood, sprouted edamame is worse than unsprouted.

Love Edamame? Here’s What to Do!

If you love edamame and want to toss some in your salad, go ahead. A few here and there isn’t going to cause any problems barring the presence of a soy allergy.

But … don’t go munching it like popcorn and developing a regular snacking habit eating a bowl or several handfuls at a time. Most especially, edamame is not a good snack to give to growing children (soy formula is a disaster too) or hormonal adolescents going through puberty. Even adults including menopausal women would be well advised to avoid eating it on a regular basis.

Make sure if you enjoy a handful of edamame from time to time that it is always cooked and labeled organic. This means skipping the edamame appetizer at restaurants in North America no matter how hungry you are. Wait for the main course or order another appetizer because chances are very good it is GMO.

Remember: hairy mouths in hamsters within three generations of eating GMO soy! Most edamame in the United States is genetically modified. Spare your grandchildren people!