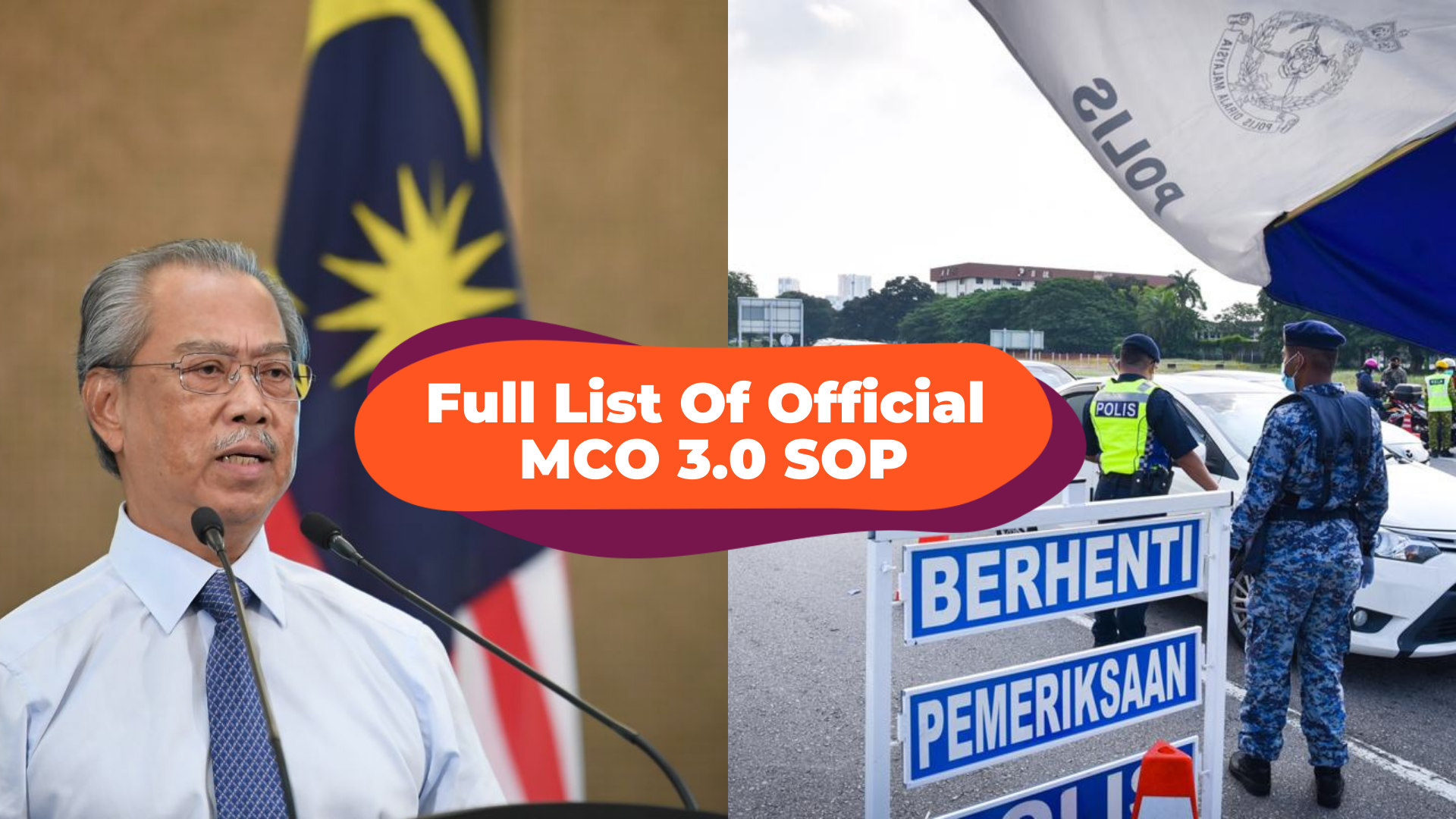 MCO Phase 1 Further Extended Till Cases Drop Below 4,000 Per Day

After much speculation of the reimplementation of MCO over the past few days, Senior Minister Ismail Sabri Yaakob finally addressed the nation on 4 May 2021 and announced that 6 districts in Selangor will be placed back on MCO from 6 - 17 May 2021. The 6 Selangor districts affected are: Hulu Langat, Petaling, Gombak, Klang, Kuala Langat, and Sepang.

[Update, 10 May 2021] Prime Minister Muhyiddin Yassin announced that the MCO will now be implemented nationwide from 12 May - 7 June 2021 following fresh surges of COVID-19 cases in the past few weeks. New SOPs have also been announced.

[Update, 28 May 2021] An official statement was released by the Prime Minister's office announcing the implementation of the Phase 1 FMCO ('total lockdown') nationwide for a period of 14 days from 1 June - 14 June 2021. Throughout this duration, all economic sectors are not allowed to operate with the exception of essential economic and service sectors (full list will be released by the Majlis Keselamatan Negara soon). The FMCO will be equivalent to the first MCO announced in 2020.

[Update, 11 June] It was announced that the FMCO will be extended for 2 more weeks, currently scheduled to end on 28 June 2021.

[Update, 16 June] It was announced in a special address on June 15 that Malaysia will be implementing a National Recovery Plan (Pelan Pemulihan Negara) that will be divided into 4 phases. We will only be able to step into Phase 2 of the MCO when the average daily cases fall below 4000 and 10% of the population has received two COVID-19 vaccination doses. The government is predicting that Phase 4 of the MCO (whereby all economic sectors will be allowed to reopen) will only be able to be implemented in November and December 2021.

[Update, 27 June] Tan Sri Muhyiddin Yassin announced that MCO 3.0 initially scheduled to end on 28 June will be further extended as long as the number of cases remains high. As per the 4-phase National Recovery Plan, Phase 1 of MCO 3.0 will remain in place until these criteria are fulfilled:

[Update, 17 July] It was announced that the EMCO previously implemented in 8 districts in Selangor will be lifted from 17 July (Saturday) onwards. The SOPs in these areas will revert to the Phase 1 FMCO SOPs. Here are some confirmed SOPs in affected districts:

Refer here for the EMCO SOP (still applicable for localities in KL where EMCO has not been lifted):

Non-Exhaustive list of services and activities that are NOT allowed to operate:

Masks are mandatory in all public spaces and can only be taken off:

The government has unveiled a new HIDE (Hotspots Identification for Dynamic Engagement) system, jointly developed by Bank Negara Malaysia and the Health Ministry of Malaysia. The HIDE system identifies COVID-risk locations and flags potential hotspots by using data from the MySejahtera system, providing a warning of COVID-19 spikes in locations across the country.

The first HIDE list of business premises was released by the Kementerian Kesihatan Malaysia this week and premises on the list have been ordered to close for three days to prevent the further spread of COVID-19. Many supermarkets, public transport stations as well as malls within Klang Valley including Mid Valley Megamall, Pavilion Kuala Lumpur, Suria KLCC, Sungei Wang Plaza and Sunway Velocity Mall have appeared on the first HIDE list.

Need A Swab? Book A Swab Test On Klook

You can now book reliable swab test services on Klook - whether you'd prefer a convenient in-home swab test service or head over for a drive-thru swab test at the LifeCare Diagnostic Medical Centre in Bangsar South. Book your voucher on Klook and get swabbed safely and conveniently by certified healthcare workers in PPE suits.