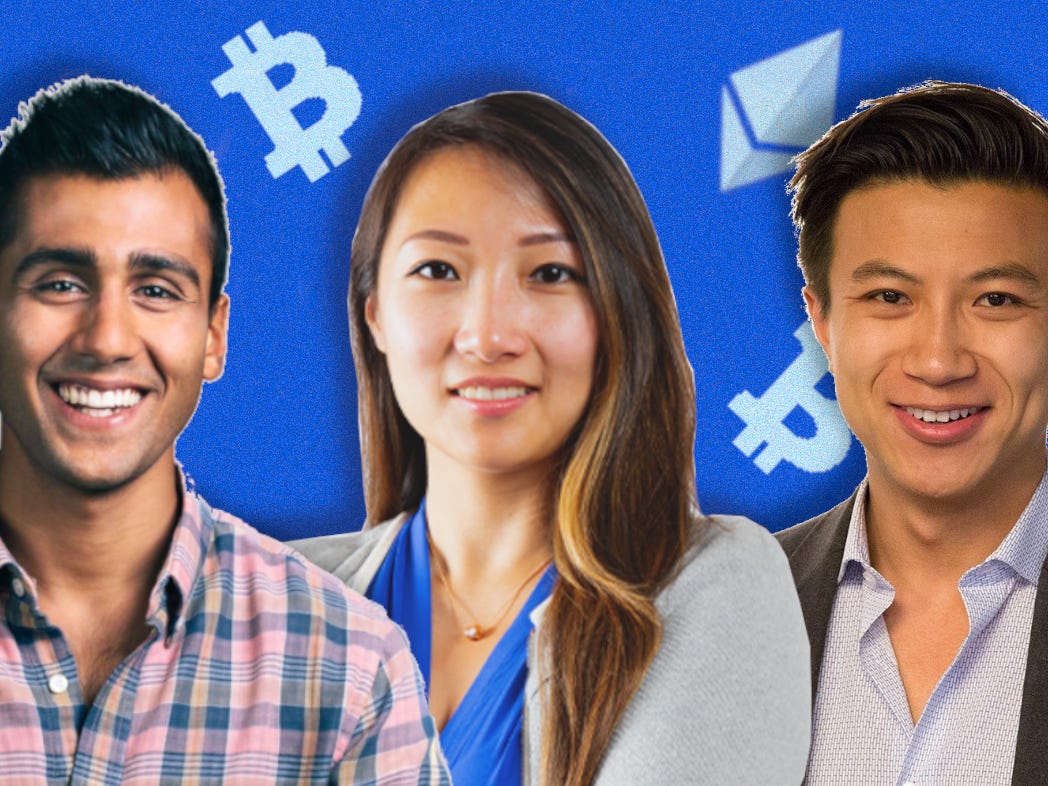 This story is available exclusively to Insider subscribers. Become an Insider and start reading now.

The rise of digital assets isn't just about the price of bitcoin.

The broader embrace of cryptocurrencies — from Wall Street to the US Treasury — has given birth to entirely new industries, from digital payments to decentralized finance. As a result, crypto and blockchain have become a new target for growth-hungry startup investors.

A record $25 billion in funding went to blockchain companies last year. In the fourth quarter of 2021, nearly 25% of that came either directly from crypto-focused corporations or their venture capital arms, a share now on par with traditional VC firms, according to CB Insights 2021 State of Blockchain report.

That's a big jump from 2015, when fewer than 15% of blockchain funding originated from corporate investing teams. And their share could grow as more digital assets startups formalize their investing efforts into dedicated venture capital teams.

Rather than investing solely to maximize returns, corporate venture capital arms are generally tasked with investing in startups that can bring new technology and ideas in-house as well as deliver economic gains. But in the world of crypto, the trend of startups investing in other startups is typically viewed more as bets on an "ecosystem" of nascent fintechs, as Coinbase Ventures' Shan Aggarwal told Insider.

These investments are made in the hopes that a proverbial rising tide will lift the boats of the industry as a whole.

That approach has seen companies like Coinbase place bets across a vast swathe of the crypto landscape. Since its launch in 2018, for example, Coinbase Ventures has participated in more than 200 deals, according to Pitchbook data, and more than 60 in 2021 alone.

To be sure, the recent frenetic pace of startup investing is unlikely to continue this year. Venture funding to all startups slowed in the first quarter of this year, Crunchbase News reported in early April. Some investors, meanwhile, have signaled that rocky exits for private companies going public in 2021 will lead instead to a ramping of M&A activity across the fintech sector.

Investors acknowledge that the industry could face tough times ahead, but say they are playing the long game when managing their portfolio of crypto companies.

"You could argue that right now, there's enough of a base of users and investors in crypto that the floor is another order of magnitude higher. But that could definitely change, and we could see ourselves in another multi-year bear market . It's really difficult to predict that," FTX Ventures' Amy Wu told Insider. "On the venture side, we are really trying to think about this space on a 10, 20-year time horizon," she added.

Amid this backdrop, new crypto venture funds have joined the fray. This February, NFT marketplace OpenSea launched its own venture arm. In January, FTX launched its own $2 billion fund, led by Wu. And last November, stablecoin issuer Circle also launched its own dedicated investment team.

In their view, these funds are especially primed to understand the technology and depth of the crypto world.

"It takes a specialized financial shop to really understand the complexity, the depth, the pace of change in the industry and discern between the coins out there," Alex Chizhik, Okcoin's head of listings, told Insider.

As the world's largest crypto exchange, Binance sees tens of billions of dollars in spot transaction volume each day. A smaller portion of that, meanwhile, separately flows every day through Binance.US, which caters solely to American customers.

Ken Li, investment and M&A director at Binance, said that the sheer growth of activity within crypto has proved an opportunity for the company's venture arm, Binance Labs, to seed venture investments across digital assets.

"Even a few years ago, when Binance first started, I would say the number of active wallets in the ecosystem was no more than 10 million. Today, that number is probably 250 to 300 million plus," Li told Insider.

According to Li, Binance doesn't frame their deals in terms of the size of the check they might write, instead preferring to focus on the "overall allocation that we hold in a project relative to the stage, and then also our position and our ability to be meaningfully valuable investors."

Already in 2022, Binance Labs has invested in 14 crypto startups according to Crunchbase, in sizes ranging from $1.1 million fundraising rounds to $16 million. Binance Labs acted as the lead investor on all but two of these. Li said that Binance prefers to take on the lead role in deals it pursues, across early or later-stage rounds.

Binance.US itself, meanwhile, grabbed headlines in early April when it raised $200 million in seed funding (Circle Ventures, among other funds, invested in the fundraising.)

As the largest US-based crypto exchange by spot volume, Coinbase was earlier than most digital assets startups in establishing a dedicated team to focus on private market venture investments.

Coinbase Ventures launched in 2018, some six years after the company was founded.

Coinbase's approach to venture investing has seen it place bets across a wide swathe of early-stage players in crypto. "The volume of deals and pace is really just a reflection of the acceleration in innovation in the industry. From 2018 to 2021, the rate at which we were investing increased pretty significantly," Aggarwal said.

As one trend to watch, Aggarwal said he's particularly interested in the growth of "multi-chain ecosystems" as crypto developers increasingly work across different blockchains including Ethereum, Solana, and Avalanche.

"You should have the ability to build your product and have transactions be published to the blockchain, on whichever blockchain is best fit for purpose for that application that you build," said Aggarwal.

Last November, Circle announced the launch of Circle Ventures, a venture fund focused on early-stage blockchain projects. The move marked a logical next step as Circle built out a network of partners and clients across crypto, the company's CFO, Jeremy Fox-Geen, told Insider.

"We touch the crypto ecosystem for our products and services in many, many different ways, and we thought it would be a natural extension of that to be able to bring some financial capital to bear, given that we are a robust and well-capitalized player in this ecosystem," said Fox-Geen.

According to Fox-Geen, Circle Ventures' performance can't be judged solely by measuring financial returns or the extent to which portfolio companies strategically map to Circle's own businesses. Instead, its investing thesis is more macro-oriented, predicated upon building a broader network of blockchain-enabled use cases and "rebuilding" traditional financial services.

"If this happens, it's going to be good for us and our business, because our business fundamentally itself is both a driver and a beneficiary of that kind of global rebuild," he said.

That being said, Circle Ventures hasn't shied away from participating in large venture rounds and, since launching, the company has invested in 10 crypto startups, according to Crunchbase.

Founded in 2019, crypto exchange FTX has rapidly become one of the world's largest by volume.

In January, FTX announced the launch of a $2 billion venture fund "with a broad investment mandate across social, gaming, fintech, software, and healthcare."

Amy Wu, FTX's head of ventures, M&A and gaming, heads up a team of eight working at the fund. Wu joined FTX in January from Lightspeed Ventures, itself an investor in company.

"We are in front and know so many great founders and teams, and we were already getting pulled in and working with them on a strategic basis. It just made sense that we were then also lead investors in their rounds. It was really a natural evolution of our relationships with these teams and some founders," Wu told Insider.

FTX Ventures differs from some others on this list in one unique way: Since launching, the investment arm has shown a propensity to put its $2 billion mandate to use by targeting large investments towards specific bets on a given area within crypto.

"The beauty of not having any external LPs is that we're so flexible," Wu said. "Naturally as an industry matures, you move towards higher specialization and higher conviction bets," she added.

Since its January launch, FTX Ventures has invested in 11 startups, per Crunchbase. In March, the company announced a $100 million debt investment in the banking app Dave, through which FTX US will serve as Dave's exclusive crypto partner as it looks to offer digital assets payments to its customers.

OKGroup's spot-focused, regulated digital asset exchange, Okcoin, has grown rapidly since its founding in 2013. Okcoin now counts more than 100,000 customers across 192 countries, including many states in the US.

But OKGroup also oversees OKX, a spot and derivatives crypto exchange for customers outside the US, as well as Blockdream Ventures, a dedicated venture arm launched in 2021 with $100 million in initial capital.

"We've been here long enough, and we've seen some ups and downs in the market," Ren told Insider.

Rather than placing bets on the future of individual tokens, Ren and Alex Chizhik, Okcoin's head of listings, said the venture team has focused instead on infrastructure bets. "You will see a lot of our investments are really the building the infrastructures and providing the tools to enable the users and developers around the blockchain," Ren said.

That approach has seen Okcoin develop a grant-based program to push the adoption of bitcoin.

This March, Okcoin debuted the new project, called Bitcoin Odyssey. The initiative, engineered by Okcoin and open-source Bitcoin network Stacks as well as high-profile crypto names like Digital Currency Group, will invest $165 million over the next year in blockchain projects being built on Stacks.

Blockdream Ventures has also invested in three startups this year, most recently participating in crypto-focused social network Taki's $3.5 million seed round alongside FTX and Coinbase Ventures.

An icon in the shape of a lightning bolt.